Wow! I’m still processing how great the NHL All Star game was for Raleigh and the entire Triangle-area community. Our partnership as the Corporate Real Estate Sponsor for the Carolina Hurricanes has been a great benefit to Linda Craft & Team, Realtors® but this experience really took it to another level.

I met a ton of people throughout the weekend. At the Fan Fair, I met people from all over the country and Canada who went on and on about how friendly Raleigh was. Fans from places like Toronto couldn’t get over our mild weather, and kept telling me how fascinated they were that they found true hockey fans ‘in the South’. 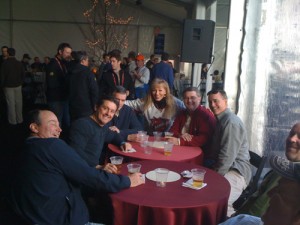 Tailgating with friends is fun!

Some talked about taking our tradition of tail-gating back to their communities, weather permitting! At the player draft, I was impressed by how the players handled themselves. Even though someone had to be drafted ‘last’, Phil Kessel, the Toronto Maple Leaf who was the final player selected  had just compensation, a new car from Honda and a $20,000 donation to a charity close to his heart, one that fights cancer.

I was glad to hear NHL officials say that Raleigh threw the best NHL All Star experience they’d ever had. It’s a real credit to our community, and is good news for attracting other events and residents to our area. The All-Star skills competition and game itself were a lot of fun too. I thought the backward skate competition was hilarious. I can’t even skate forwards! I also thought it was great to see the goalies race, in their full gear. They looked cute hustling around with all that equipment on!

As someone who pays attention to marketing and advertising, I was very interested in the launch of the NHL Guardians project. The league is creating 30 Superheros for the individual teams They plan to engage fans with the characters they’ve developed through comics, online interaction and events at the individual arenas. This is a different kind of interaction than fans have with the teams’ mascots, and I’m very interested to see how it plays out.

Speaking of mascots, Stormy was joined by the other 29 mascots from around the league at the All-Star game. They were absolutely a treat to watch; great entertainers, every one of them! The bottom line for me about the All-Star game was that it was a great showcase for our community for people from around the country and Canada, and I think some people may have decided that Raleigh’s a great place to live! If you know someone who is looking or a home, or looking to put their home on the market, let us know and we’ll create an action plan as we have for more than 5,000 people through Linda Craft & Team, Realtors®. Call us today at 919-235-0007 and we’ll create a plan that’s right for you!

Raleigh Real Estate Blog
Keeping you up to date on the real estate trends in Raleigh, Cary, and the Triangle Area.